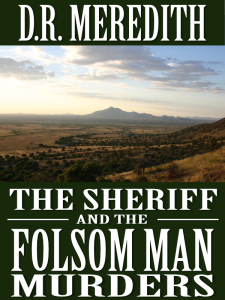 Enrique Armijo, archaeologist, and in his own mind, the world’s authority on the Folsom Man culture, is spying on a ritual performed by the so-called Skin People in the crater of Capulin Mountain, an extinct volcano in northern New Mexico. He doesn’t expect to be murdered. He certainly doesn’t expect the weapon to be a prehistoric atl-atl. Back in Crawford County, Texas, Sheriff Charles Matthews doesn’t expect a call from his deputy, Raul Trujillo, about the archaeologist’s murder and the bizarre weapon used. He certainly doesn’t expect to hear that the atl-atl has been found in his deputy’s hotel room and that Raul is charged with murder. Knowing that no matter what the evidence says, Raul didn’t murder anyone, Charles leaves his badge behind in Texas and steps into New Mexican Sheriff Kit Lindman’s territory to prove his deputy and friend innocent.

Up in the Pahnadle, D. R. Meredith has been quietly adding quality volumes to a genre that is possibly one of the most popular categories in fiction today, the murder mystery. . . .Such complexity of feelings in a character is rare in what often is call ‘formula fiction.’”
Clay Reynolds
The Dallas Morning News

“In THE SHERIFF AND THE FOLSOM MAN MURDERS Meredith hasgone beyond the physical landscape to develop an atmosphere more frightful  and spine-tingling than is found in the earlier books. Also the climactic confrontation between the sheriff and the killer. . . .achieves great suspense.”
Southwestern American Literature

“It is one of the delights of Meredith’s Sheriff novels that she knows the Panhandle country and Panhandle people so well that she can mirror not only what it must be like to be a lawman there but what it is like to live there.”
El Paso Herald-Post

“Meredith is an artist with words.  Her well-rounded characters are vivid, her presentation of idiomatic language makes for realistic dialogue and the almost unknown geographical area seems more than a speck on a large-scale map.”
Murder Ad Lib

“Rivals even the best in the genre.”
Review of Texas Books